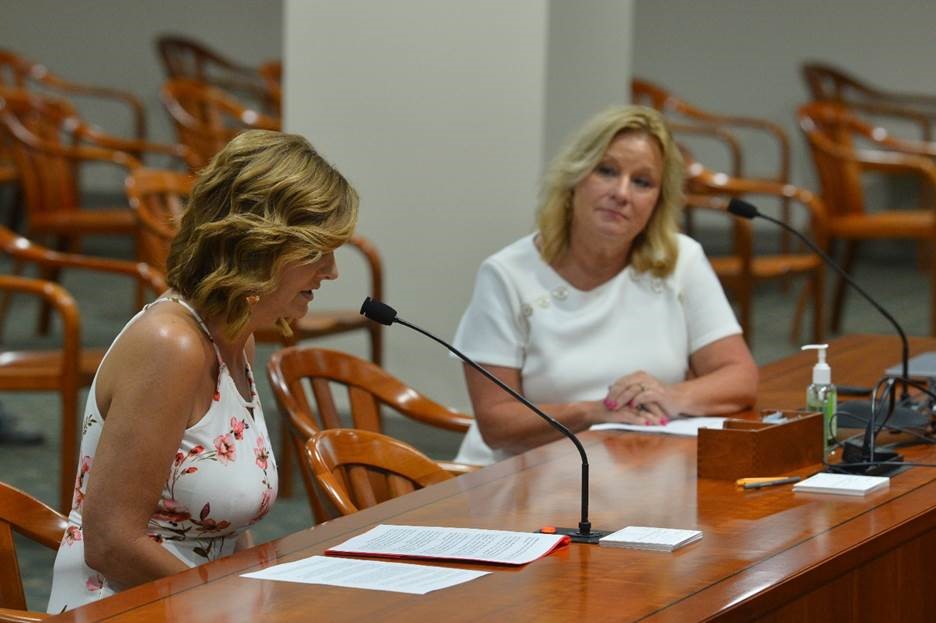 State Rep. Julie Alexander (right), of Hanover, listens to testimony from Amy Ciokajlo on House Bill 5570 before the House Transportation Committee on Tuesday, June 23. The proposal renames a portion of M-60 in Jackson County from Fairway Drive to Emerson Road as the “Sergeant Matthew R. Soper Memorial Highway – honoring Ciokajlo’s brother after the Jackson native was killed in action in Iraq in 2007.

A proposal from state Rep. Julie Alexander, of Hanover, honoring a local military hero in the Jackson community was recently approved by the House Transportation Committee.

A portion of M-60 in Jackson County from Fairway Drive to Emerson Road would be known as the “Sergeant Matthew R. Soper Memorial Highway” under House Bill 5570. Sgt. Soper died of wounds sustained from an improvised explosive device in Bayji, Iraq on June 6, 2007.

A Purple Heart and Bronze Star recipient, Sgt. Soper was just 25 years old and had served one tour in Iraq before being called up again in June 2006.

“Our military heroes continually put their lives on the line to protect American freedoms and ideals,” said Alexander, the mother of a son who served five years in the United States Marine Corps. “This tribute memorializes Sgt. Soper and recognizes the sacrifice he made for his fellow community members and his country. We are forever indebted to that sacrifice.”

Alexander was joined in testimony by Soper’s sister, Amy Ciokajlo, who spoke about what the tribute would mean for her family and the area.

“Each sibling in our family lost one of their best friends and my parents lost a son,” Ciokajlo said of her brother’s death. “His sacrifice will always be remembered, respected and appreciated. He is appreciated in the community. He was one of their own and they have deemed him their son.

“Each time my brother is memorialized, it extends far beyond those who share his last name.”

HB 5570 advanced to the House Ways and Means Committee for consideration. It will move to the House floor if approved.

State Rep. Julie Alexander, of Hanover, today announced Speaker-elect Jason Wentworth has appointed her to help determine the policy priorities of the Michigan House for the upcoming 2021-22 legislative session.

Alexander, of Hanover, said the proposals would better serve residents of our state in the wake of the recent Michigan Supreme Court ruling that struck down the governor’s coronavirus related executive orders. Some key measures the House is implementing include extending assisting workers and job providers, better protecting nursing home residents and unemployment benefits.

State Rep. Julie Alexander’s plan removing a financial barrier for Michigan families to obtain a certificate of stillbirth was recently been signed into law by the governor. The new law comes during the month of October, which is Pregnancy and Infancy Loss Awareness Month in Michigan.

Legislation from state Rep. Julie Alexander ensuring infrastructural projects are more specifically tailored to the needs of communities – and drivers – has been signed into law by the governor.