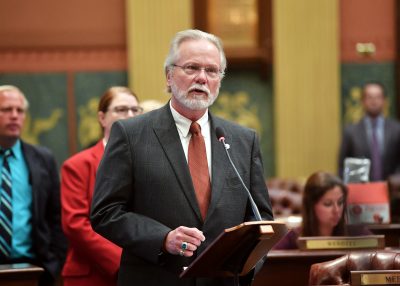 “After speaking with a number of individuals in the district today, I must say that I am shocked and disappointed to hear of the comments that were made by Leelanau County Road Commissioner Tom Eckerle before a recent road commission meeting. I called Mr. Eckerle to confirm he made these comments. He confirmed that he did. This type of racial slur is flat-out unacceptable and ignorant. I asked Mr. Eckerle to resign his position as road commissioner in light of these comments and shall he refuse, the citizens of Leelanau County have every right to recall him from office.

“It saddens me to have to even make this statement.”

House Transportation Committee Chairman Rep. Jack O’Malley says traffic fatalities are up in 2020 in Michigan, despite there being fewer traffic crashes and fewer cars on the road. Through late September, 12 more traffic-related fatalities had been recorded in Michigan than the same time in 2019.

Rep. O’Malley talks about Monday’s meeting of the Joint Select Committee on the COVID-19 Pandemic with Michigan Medical Executive Dr. Joneigh Khaldun. Rep. O’Malley says he’s concerned by a lack of understanding of the broad-based problems brought on by the epidemic.

Rep. O’Malley: Administration continues to not weigh all factors in COVID-19 crisis

Rep. O’Malley talks about House approval this week of his HR 244, that calls on President Donald Trump to officially declare the waters of the Straits of Mackinac as designated waters.